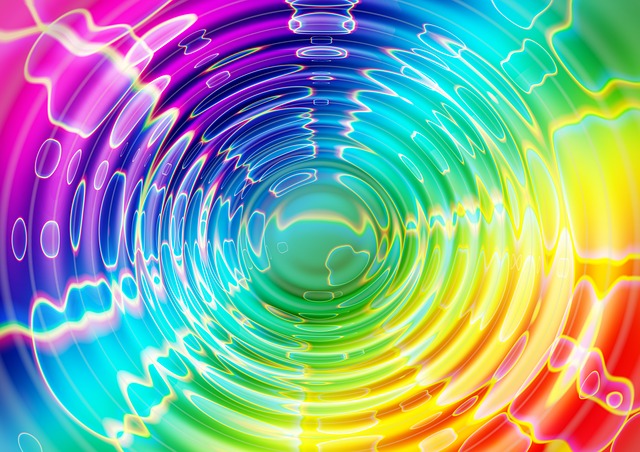 Your daily word of inclusiveness

How to speak an inclusive language

Recently I conducted a brief poll on LinkedIn (https://lnkd.in/gTDaKPs) asking the professional community what they experience as their biggest challenge to implementing Inclusive Leadership.

First of all, I want to thank all the people who have taken a moment to participate and many of them continued the conversation in public comments and private messages.

The intention of the poll was to see the overall perception and get a sense of what makes it difficult for people to practice inclusiveness. Most people today are exposed to working with others across differences of gender, race, generation, language, culture, beliefs and personal orientations. Many of the multinational organizations are convinced that diversity is not just political correctness but a business imperative and many have defined concrete goals around diversity such as having more women in leadership positions, reviewing practices around hiring people from a more diverse pool of talent or decrease pay disparities.

The biggest difficulty appears to be around embedding inclusive practices in daily actions followed by recognizing subtle bias. 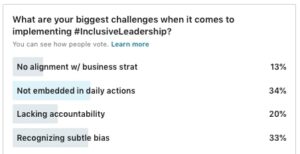 The reason for this is that among the well-meaning company policies and intentions of creating an inclusive workplace, there is little cohesion on how this should look in daily actions between employees. Taking a closer look, it becomes clear that most people have only a vague idea what inclusiveness means, how we can recognize it and how we experience it.

Having a clear definition around concepts shows what is truly important about the concept and allows for a common understanding by many people. Only when an organization is able to make a statement about the fundamental nature of “inclusiveness”, are they able to measure it, incentivize it and build it into the corporate culture at all hierarchical levels.

How can we expect people to practice something consistently if there are vague or different definitions of what they should be doing?

Inclusiveness: leverage the diversity of the group

Being inclusive means effectively working, communicating and building relationships with people across differences in regards to gender, generation, race, language, religion / beliefs, sexual orientation and abilities. Being inclusive means seeing these differences as valuable qualities of each individual’s identity and giving each individual the same opportunities. Inclusive leadership involves inviting different people, engaging everyone to participate, listening to their views and valuing the differences.

Inclusive leaders direct, guide and influence people in a more curious, collaborative, creative and compassionate way in order to leverage the diversity of the group and achieve a common goal with more creativity and effectiveness.

Diversity is the metric. Inclusion is the mechanism. Engagement is the feeling.

Practicing a few habits consciously, consistently and in a way that is observable to others makes you the inclusive leader that you are and aspire to be. As a general attitude, you can

Creating such an environment helps that people feel accepted, welcome, heard and valued - and this is the felt experience of inclusion. The result of this felt experience is engagement, which means that people are emotionally connected to the workplace and the coworkers. Engagement is what drives people to give their best and keeps them loyal to the company.

As with most things, being inclusive becomes easier with ongoing practice. For this, people need

If you want to bridge the gap between inclusion as rhetoric and concrete actions, you need to open your eyes and ears to situations where differences show up. Each one of us encounters these situations several times a day, so there are plenty of opportunities to practice. When you go about your day with an attitude of curiosity and compassion, observing situations not only from your own perspective but that of people different from you, you will recognize many occasions that wait for you to show up as the inclusive leader you already are and want to be perceived as.

We call these tiny acts of inclusiveness micro-inclusion. Micro-inclusions are the opposite of isolation: they are deliberate acts of connecting with our common humanity, remembering that each one of us has feelings of inadequacy and disappointment. It is the understanding that despite our individual and unique qualities, something connects us and that we all belong to a system that is beyond our individual projects and goals.

So what are concrete examples of practicing inclusiveness at work? How can you widen the circle and invite more people inside?

Let’s start with inclusive language. We speak all day and there are several scientific studies that show the impact of the language we use on our thoughts. Words are not just labels but they reveal our perspective. Words have power and they influence our actions – and over time our culture.

Here are 5 tips on how to consciously choose your words to help others feel accepted, welcome, heard and valued.

It probably happened at least once or twice that you have addressed your team with “guys”, even though it was a mixed group with women, men and maybe even non-binary people. Using gendered language can exclude those people who do not identify as the gendered expression you have used. A better alternative is to say “Hey, team / everyone / friends / folks”.

We tend to use “he /his” as generic pronouns which implicitly tells us that the person referred to is a male. In English, you can use “they / their” as singular generic pronoun to show that all people are included, independently of their gender or identity. Example: Instead of “Each employee is welcome to share his or her thoughts” you can say “Each employee is welcome to share their thoughts”.

When you are a native English speaker and you speak with people whose mother tongue is not English, remember to use common words and avoid idioms or your local slang. I still remember how difficult it was for me the first time I worked with an Australian manager: not only did I have real trouble understanding his accent; he also used words that I had no idea of what they meant. One day he gave me directions to go to a client and said that at a certain street I have to take a “chuck a uey”…. A what? As I learned, “chuck a uey” in Australian means a U-turn!

Often, people will attribute different adjectives when they describe the same behavior of a man or a woman. Common examples are being assertive (man) versus bossy (woman), passionate (man) versus hysterical (woman) or empathetic (man) vs emotional (woman), persuasive (man) vs argumentative (woman).

When you describe another person’s behavior or attitude –especially when you perceive it as negative - check in with yourself: Would you use the same word if it was the other gender?

5) Avoid stereotypes, even positive ones

Sometimes people think they are saying a compliment and forget that what they actually voice is a stereotype, generalizing a group of people.

“Women have a natural mothering instinct and are more caring”

“Asians are good at math and science”

All these expressions paint a caricature of the person to whom we are referring. When you speak, check-in with yourself if the words you are using have an “all” or “no one” perspective.

6) Avoid words with a negative or passive meaning

Sometimes we use unconsciously words that describe another person as weak. Sometimes we use these expressions to show our compassion. And yet, it is more inclusive and respectful to use neutral or positive words.

Instead of “X is suffering from [illness]” say “X has [illness]”

Saying that “X is fighting [illness]” implies that the illness is something that has to conquered and annihilated and people having a specific illness might hear an underlying opinion that they have the illness because they did not fight hard enough / were not strong enough.

Use language to include and empower others

The language we speak will give cues about our perspectives and opinions and will influence our relationships with others. Furthermore, using an inclusive language shows our willingness to connect with others on a human level, understand their individual situation and feel for them.

Speaking an inclusive language is an ongoing journey with situations in which we will all make mistakes. As an inclusive leader, own your mistakes and commit to understanding how the background of another person shapes their experience and that we can have a very different interpretation of the same situation.

Will you consciously choose your words to include and empower others?

Will you use at least three times inclusive language at your workplace today?