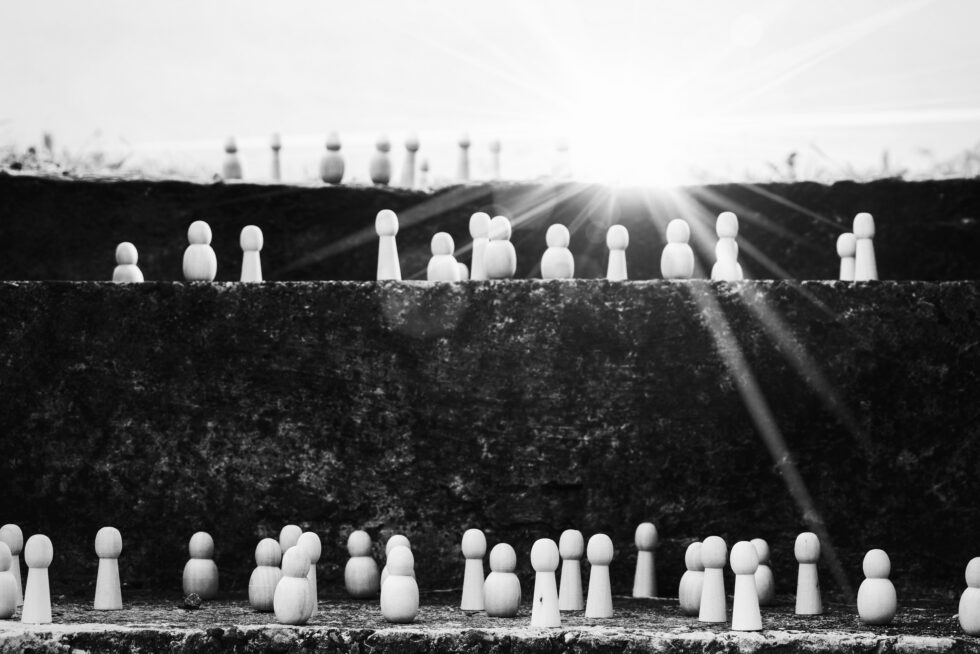 As I observe the various issues and social challenges in organizations and our world, I often wonder:

We all know and need the feeling of being seen for who we are, being appreciated and included. And yet we also know that this is not the reality: according to a Deloitte survey with 3,000 respondents, 61% of people said to cover at least one aspect of their life and identity at work.

I am convinced that fundamentally, this question boils down to the uneven distribution of power and privilege: who has power and thus access to privilege? ...and how is that power used?  I also recognize that privilege is a loaded word, easily triggering defensiveness, especially among people who represent the dominant group in a given context. But when we cannot talk about things, we cannot change them; and because I think that there is a big need for change, I will bring up this difficult theme anyway.

Is difference the real problem?

When we ignore the ways power and privilege influence our lives and interactions, we might subscribe to the popular argument that the problem lies in our differences and our innate fear of the unknown.

For sure, our brain values certainty and can perceive anything unpredictable and ambiguous as utterly aversive. This can cause a perspective of “othering” when being with people who are different from us – and this perspective easily leads to discrimination and social exclusion.

But in so many ways, we are fascinated with and enthralled by the unknown, magically attracted to explore and understand it: think of the activity of scientists, inventors, explorers, journalists and novelists, philosophers, spiritualists (or coaches for that matter) and all of the curious people who are following the allure of the unknown. Even babies and toddlers, who are among the least prepared and the most vulnerable among us, are seeking to try out and understand what they do not know, always exploring new things, trying out new ways.

Human babies are born without fear and their ability to fear things develops around 6-8 months of age. We learn to be afraid of things based on negative experience (for example when you have been bitten by a dog) and by conditioning (when you hear people say that dogs are dangerous because they can bite you).

With this in mind, if diversity, differences and disagreement bring up feelings of uneasiness and fear, it’s because we have learned to see them as difficult and frightening.

At first sight, it’s not easy to conjure our differences because many aspects of our identity are so unconscious.

The Diversity Wheel consists of four layers and shows the diversity lenses through which we process experiences and make meaning of them. The accumulation of this meaning making informs how we choose to respond to situations and what impact we have on others. 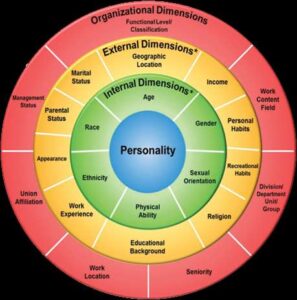 You might have noticed, that this short exercise gives little attention to your individuality and the aspects of you for which people like you: your character, your personal history, your feelings, values and aspirations.

What the exercise reveals however, is a sharp picture of your social reality: your identity which is shaped in a historical and social context in relation to others and your membership in certain groups. The Diversity Wheel helps you to visualize the categories in which people tend to put you when they engage with you without knowing you deeply.

Using the Diversity Wheel as a lens for our question whether differences are a problem, we can conclude that they are not. The root problem is a world that we have created in which we use differences to decide who has rank and how we relate to each other: depending on where we are on the wheel and how we relate to another person in a given context, we

This is particularly true for qualities at the very center of the wheel – and which are hardly possible to change, requiring us to learn to live with them, independently how we choose to reveal ourselves to others.

Clearly, diversity is about a lot more than just the “variety” as the word’s literal meaning suggests. This is where privilege comes in.

Often there is a general confusion about what privilege means and in which areas of our lives privilege plays a role. The real question is, how privilege operates at a societal level and how it becomes completely invisible, especially to those who benefit from it.

Privilege is when a social group has something of value that was bestowed upon them through what I call "winning the lottery of the Universe". A privilege represents a special right or an advantage available to a particular person or group based on membership or assumed membership in a dominant group.

Having access to privilege increases the likelihood of having things done “your way”. Holders of privilege are often granted a presumption of superiority as well as a silent permission to act on that presumption with an almost guaranteed impunity for it.

Whenever we think that something is not a problem, because it’s not affecting us in a personal way, we are speaking from a position of privilege. This is often called the “luxury of obliviousness” because awareness requires effort and commitment.

For this reason, I invite you to shift your perspective around privilege – just for the time of reading this article. Denying that privilege exists and confusing privilege with merit are serious barriers to changing the status quo.

Privilege in every day life

To demonstrate that privilege plays a role in almost every interaction in our life, I will share a few examples of my own privilege:

You see, even as I live my life as a woman, having a serious autoimmune condition, living & working in a different country from my nationality, in a society where I am in the minority, I enjoy a lot of privileges.

The complication starts when we recognize that the privileged / disadvantaged dynamic plays itself out in a maze of intersections and interactions of oppressions based on gender, race, age, class, sexual orientation and ability. And this means that each and every one of us is occupies simultaneously a role as privileged / disadvantaged, depending on the situation and the people we interact with.

The result is that while virtually everyone is disadvantaged and oppressed in some significant way, almost everyone also has access to some type of power and privilege and to one or more roles as oppressor.

I recognize that this is hard to take in and understand that having someone point out our privileges can be understood like an accusation that we are awful people. Conversations around power, rank and privilege easily induce feelings of shame and guilt and become alienating and ineffective.

Use your privilege to the benefit of others

What often proves to be helpful for me as I accompany my clients in these moments of discomfort is to acknowledge that privilege is a systemic concept and thus it has nothing to do with an individual being “good” or “bad”. Further, it is important to distinguish between “having privilege” (which is something we cannot change) and “choosing how to use our privilege” (which we have full control of). When we recognize and accept these two premises, we open up to possibility.

Lastly, let me share a disclaimer and an attribution. Over the past 9 years I have read and applied ideas from various fields and teachers in the area of NVC (Non Violent Communication), Coaching for Transformation, Inclusive Leadership and Individual & Organizational Trauma to name a few. As I learn and take part in discussions, I synthetize ideas and blend them in new ways with the intention to best support my clients. Some of the ideas you have read here have been covered by other people, in other contexts.

In this article, I have reviewed the 2nd chapter of Allan G. Johnson’s book “Privilege, Power and Difference”. If you are interested in a deep-dive of examining our systems of power, rank and privilege, you can purchase the book here.